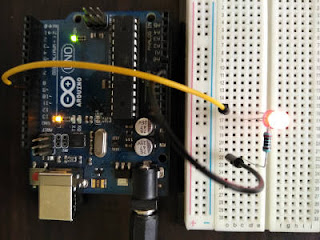 Today we will go through the Fade program that is found in the Arduino's IDE at File - Examples - Basics. The Components we will need for this experiment are Arduino Uno board, a breadboard, a led, a 220 ohms resistor, and two connecting wires. I have used a yellow and a black wire.

Now connect the Arduino board with your computer with a usb cable. And open the Arduino IDE. Open the Fade program in the Examples in Basics.

Now upoad the program on the Arduino's board. Once the upload is complete you will see the led glowing and dimming in regular intervals. That's all there is in this experiment.

I have created a trimmed version of the same program shown here below.

The second parameter in the analogWrite() function is the value of Duty Cycle that is sent to the led through the pin number 9. is value is denoted by x. We have created an integer variable x.  This is the value of the duty cycle of the PWM (pulse width modulation) that we will send to the led. This value can be in the range of 0 to 255 in the Arduino Uno board.

When the duty cycle is  0 the led is off, when we increase the number, the pulse width starts getting bigger and led starts getting brighter. It is brightest when it is 255.  We increase the PWM duty cycle value by 5 in each iteration of the loop() function. When the PWM duty cycle value reaches above 255 we start decrementing it by -5, and when it reaches below 0 we start incrementing it again. Thus the led goes from low to high intensity and back to low intensity.

You can experiment with different values in this program. If you change the value of a to 1 then the led will slowly brighten and dim. if you make the value of a higher, then the brightening and dimming process will happen faster.